Tattoo Redo is a Netflix series that invites guests to cover up their bad tattoos. The twist? The clients bring a plus one to the show and that person, whether it’s a partner, sibling, friend, co-worker, etc. gets to pick the cover up. The tattoo artist and the plus one come up with a tattoo idea that the client will want to walk away with. The tattoos are covered and revealed at the end to see if they love or hate the ink.

Tattoo removal can aid in covering up tattoos. How you might ask? By fading the old ink, it gives the tattoo artist more canvas opportunities to cover up the tattoo. For anyone who has seen the show, you know that there were some tattoos like the mandala on the back of Maya’s neck and the dragon on Anya’s thigh that were still visible after the cover up. Other tattoos on the show, such as Stanley’s numeral letters were still visible through the blastover due to scarring from the original tattoo. If these clients had faded their tattoos first, their cover ups would have been in a better position for the tattoo artist to work with.

For example, client Arthur had the name “Esmerelda” on his upper arm that was faded. That allowed the tattoo artist more room and opportunity to create the badass cow skull and owl eye cover up. If the initial tattoo was more saturated, tattoo artist Miryam Lumpini (@miryamlumpini) would have had to work around the name, but because it was so faded, she was able to give Arthur a great tattoo. Another reason why fading the initial tattoo is ideal for cover ups is because you won’t have to make the cover up twice the size of the original tattoo. For example, one of the clients had a goat tattoo around her belly button, and the cover up was beautiful, but the butterfly took up the majority of her stomach.

Also, the tribal tattoo on Shanequa’s back was covered up with red lilies but in order to cover the entire tattoo, tattoo artist Matt Beckerich (@mattbeckerich) had to use a significant amount of canvas on her back. With 3-5 laser tattoo removal sessions, those tattoos could have been faded enough to produce smaller cover up options rather than using the entire stomach and upper back. 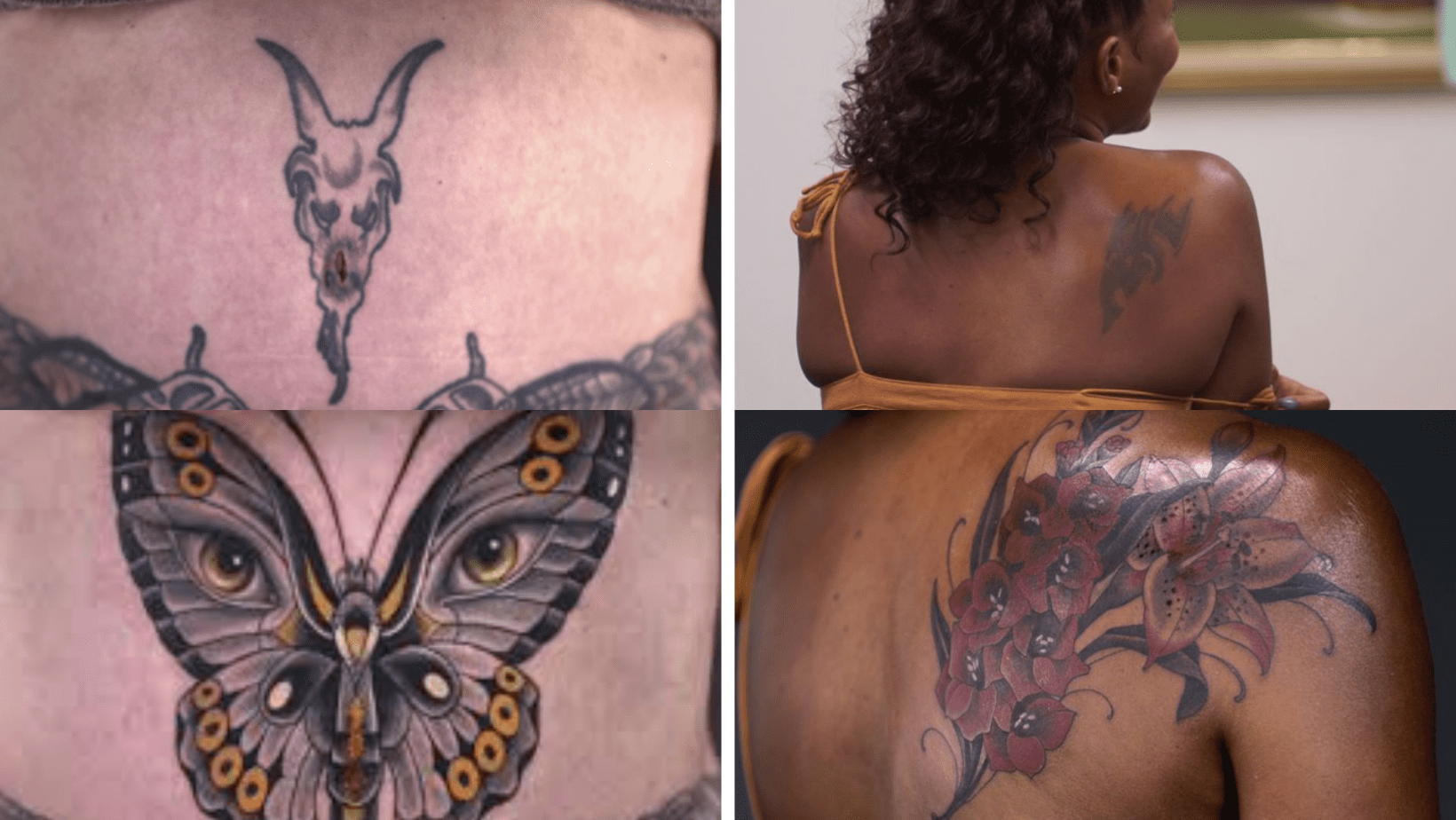 What happens if the client hates the tattoo? Without being explicitly stated on the show, we imagine that tattoo removal is offered. With that being said, it would be even more difficult to remove the cover up tattoo due to there being so much saturation. If the client had faded their tattoo prior to receiving the cover up, they would have been in a better position for tattoo removal due to there being less ink saturation.

The ink color and skin tone would also have an effect on the removal if a client decided they did not like the tattoo. For example, Shanequa’s red Lilies would likely not be able to be removed if she did not like the outcome of the tattoo. Red ink cannot be removed from skin types 5 or 6 due to the pigmentation of the skin. Therefore, she would have been left with a large tattoo that would require another cover up due to removal contraindications. Learn more about skin tone and how the color of your ink affects tattoo removal.

Here are the most commonly asked questions about tattoo cover ups.

Learn More About Tattoo Fading and Removal with Removery

Have an old tattoo that you want to be faded for a cover up? You can book a free tattoo removal consultation at a Removery location near you today! Need to see some inspiration? Check out some of the best cover up tattoos – post tattoo removal and follow us on Instagram @Removery to see more tattoo fading and cover ups.

Want to remove a tattoo?

Talk to an expert and get your free removal estimate today!